June 07, 2012
Mr. Moon realized the other day that we never got After pictures up about the landscaping he did in the side yard. When we moved in, the butterfly bushes were 5 feet into the neighbor's yard, who was being understanding and ever-so polite about asking when we might get to that project now that we've moved in? Did you need a nice little reminder of what that looked like before? This is from April 16: 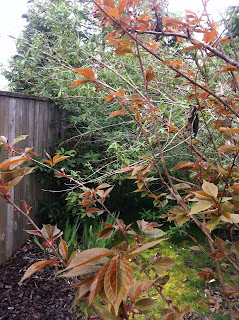 Yeah, we took those back quite a ways... 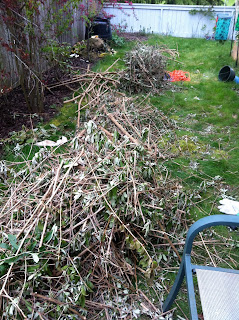 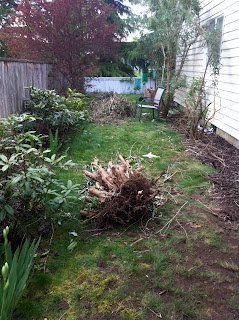 These are from only a week later, April 23. Including, as you can see (left), taking out an entire BUSH. It had been growing at an odd angle away from the house, and didn't seem very happy there in general. So, out it came. 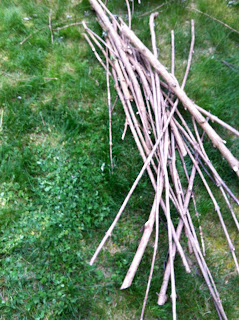 My favorite part is that we saved all the strong branches for using as stakes for other plants. Already they are holding up rose bushes and being used as the bottom rung of the trellis for my nasturtiums. 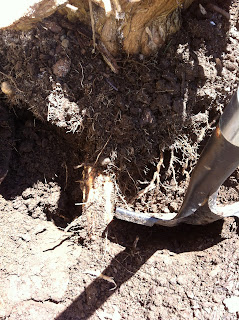 Mr. Moon is especially proud of the back-breaking work he did taking out the stump of the butterfly bush, since as you can see here, one of the roots was half as wide as the shovel itself. That would not in fact be the root that caused him to break my shovel, but another one just as big that was growing straight out from the bottom.

Can you believe that was over a month ago? I need to get some updated pictures down there, to show you how the pruned bushes have already started filling in. At the time of writing, it's dark and rainy outside. Not good for picture-taking. Also, DUDE, get on that (blog post) already! 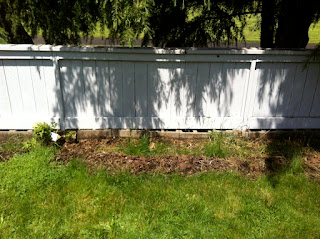 A cousin on the east side of the state sent us some raspberry bushes from her yard, since we'd had trouble getting some. De-thorned and everything. They're planted in this section next to the blueberries, under the fir tree where there will be lots of nitrate in the soil for them. Hopefully they will be happy there.

Oh, that long pile there? That would, ahhhh, be the mulch from that bed behind it that I pulled out a month or so ago and has probably killed the grass by there now. On the up side, we'd been thinking about making that bed a little further out from the fence, so now we just need to finish the job. 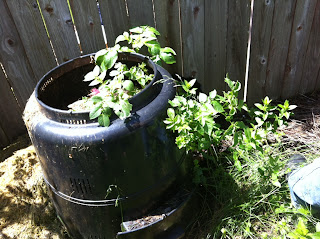 This is where I get even redder in the face. Mr. Moon ASKED ME if the potatoes which we were throwing away would grow in the compost, and I said that typically things don't grow in the compost because it's too strong, it just burns the roots. Well, I was right--TYPICALLY that is true. But I had to post this shot on Facebook for my gardening experts to inform me that in point of fact, potatoes LOVE pure compost, and it appears that's what's volunteered in our bin. Ahem. Oops. Anyway, the decision was made to stop throwing things into this bin (except perhaps the occasional load of grass clippings) to allow the potatoes to grow without being totally lost in the pile, and to start back up on the pile to the left of the bin itself. There are plans for a better compost system here, but this is what we're stuck with for a while.

Everything else I've wanted to give a "haircut" to, the internet has told me when to do that. But my leeks, I get nothing telling me I can even trim them while they're growing, just to keep burying them if the white parts show over the dirt, so I don't know. They're huge now, easily 3 feet out of the dirt, and I can't imagine I can't trim them and use them like every other similarly-shaped onion-family plant in that damn garden. So when Mr. Moon and I get back from our road trip, I'm going to trim one of the plants and see what happens.

Popular posts from this blog

Food Storage: Dry goods and Freezer goods, all in one day! 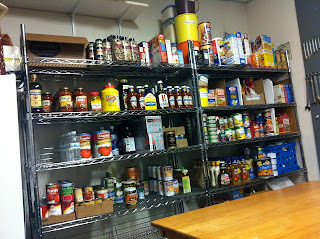 I previously discussed, without pictures, the food storage situation at our house. I didn't have pictures then for a lot of reasons, one of which being that I've never been much of a shutter bug, as evidenced by the fact that I forget a lot of the "Before" pictures for some of these projects. Also, it's one thing to show the before pictures of a shed in disarray, most people with a shed are probably in the same boat. But I don't want to shame people publicly for being behind on major household projects, especially when there's no real "fault" to be thrown around. This is why we're here.

But! That won't stop me from bragging on all the awesomeness we've accomplished!

These shelves were just full, stacks had toppled over, things were stacked in front of other things so we had no idea what we had, and I'll just skate right on past the details of the mouse infestation issue which has been taken care of, thank goodness. Of course, t…
Read more

September 01, 2017
Just meandering around some ideas because I have been super productive today and have no TV service...
Trying to decide what to make for winter holiday gifts this year. I'm envious of my mother's ability to pick Just The Right Gift for people. She's put a lot of effort and thought into being good at it, and having a disposable income helps though she's also very good at doing gifts on a budget.
That's not me. I'm not bad at it, I'm just broke. As a result I have found my niche making bulk food gifts. Less personalized to the recipient but a more personalized gift of myself.
One year I made Hot Cocoa Baskets! A basket per family home with a mug per person, a selection of hot cocoa packets, decorated baggies of marshmallows and cookies. It was supposed to have chocolate-dipped spoons and jars of homemade cocoa mix, but I had a job change three weeks before Christmas and ran out of time. Averaged cost per person: $1.76.
One year we made 100 lbs of plums into ja…
Read more

December 04, 2017
Monday: Philly cheesesteaks
Tuesday: TACOS (like every Tuesday. This week is chicken)
Wednesday: Buffalo chicken casserole in the slow cooker
Thursday: Ribs & salad
Friday: Family dinner at my mom’s house
Saturday: Leftovers every week
Sunday: Tortellini with pork sauce from leftover ribs.
Did I mention we don’t have an oven?
Read more

HJ
Just a small town girl, living in a lonely world... From a small university town in Michigan to the slightly larger city of Seattle. I'm a dreamer, a schemer, and an explorer. I'm very glad my partner lets me have a polyamorous love affair with coffee, because Coffee and I love each other very much. I'm coming to terms with being disabled; living with PTSD, OCD, and other such Alphabet Soup mental health complications, plus a bunch of physical Stuff including chronic fatigue, fibromyalgia, and limited mobility. I feel like this blog is an important part of my journey. Something I need to share with others, to help us all grow and learn and change ourselves for the better with a sense of community about us. It's at least 50% cooking, but there's a bunch of other stuff here too!